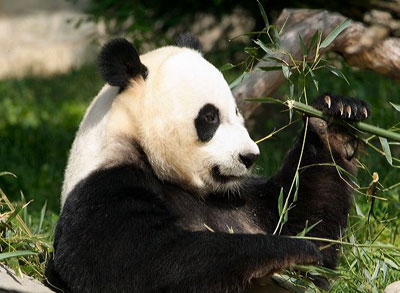 Panda Awareness Week (PAW) kicked off on July 4 in London.  Among the world’s rarest and most threatened animals, giant pandas are adorably plump, prominent symbols of nature’s treasures, international diplomacy and global efforts to save the world’s long list of endangered species.  PAW is the work of China’s Chengdu Panda Base, a leading panda breeding and research base in southwest China’s Sichuan province that plays an important role in saving giant pandas from extinction.

The clip below shows some playful young giant pandas enjoying a fun workout at Chengdu Panda Base.  (Warning: This video contains images of extreme cuteness that may be highly addicting.)

As home to nearly all of the world’s wild giant pandas, China has practiced the fine art of panda diplomacy since the Tang Dynasty (618-907), when Empress Wu Zetian (624-705) sent a pair of the animals to the Japanese emperor as a gesture of goodwill.

From 1958 to 1982, China reportedly loaned a total of 23 giant pandas to nine different countries.  Chairman Mao Zedong’s aggressive brand of panda diplomacy may have reached its height when the Communist leader sent giant pandas Hsing Hsing and Ling Ling to Washington, D.C. on the heels of U.S. President Richard Nixon’s historic summit visit to China in 1972.  Writing in the Irish Times, Frank McNally suggested the animals might have been the most deserving recipients of the Nobel Peace Prize.  Apparently, Nixon chose to reciprocate by giving China a pair of musk oxen in return.

Despite their Asian origins and exotic good looks, giant pandas are essentially black and white bears.  Full grown adult giant pandas typically tip the scales at 220 to 330 pounds or 100 to 150 kg.  While at birth, a baby panda cub weighs in at a tiny 3.5 to 7 ounces, or about 1/900th of the size of its mother.  Despite their formidable dimensions, adult pandas are adept tree climbers and can frequently be found lounging among the limbs of dense bamboo forests.

Another Helping of Bamboo Please

There’s a reason why many fetching panda pictures feature one of the lovable animals sitting on its haunches or reclining on its back gnawing away at a bamboo shoot.  Giant pandas are some of the world’s most dedicated vegetarians.  Despite their adorable, roly poly physiques and carnivore’s digestive system, pandas have evolved to feast almost exclusively on bamboo leaves.

Long stints at the dinner table are a direct result of the intriguing juxtaposition in the pandas’ eating habits.  Giant pandas spend anywhere from 10 to 16 hours per day consuming 26 to 83 pounds (12 to 38 kg) of bamboo in order to fulfill their daily dietary requirements. 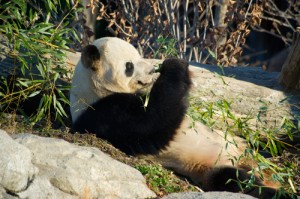 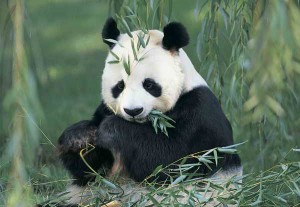 Fortunately, the fibrous green shoots that monopolize the panda’s diet grow like a weed once they take hold.  Although, it can take 20 years for a bamboo forest that dies off – a natural phenomenon occurring every 15-120 years – to return to the point of supporting a giant panda population.

While the pandas’ fondness for all things bamboo is well-documented, the recent discovery of a panda feeding on the carcass of a takin (Himalayan goat-antelope) that died of natural causes has raised eyebrows within the conservation community.  The evidence came courtesy of a motion sensor camera on the Motianling Land Trust Reserve in northern Sichuan province that was established by The Nature Conservancy, Peking University and local government partners to assess and monitor local wildlife.

Before modern civilization encroached on the pandas’ natural habitat, they were once widespread in the temperate broadleaf forests of southern and eastern China, Myanmar (Burma) and northern Vietnam.  As economic development took hold in China’s lower lying areas, the pandas retreated to more remote mountainous surroundings.  Satellite imagery reveals that half of the limited natural panda habit remaining in 1974 was lost in a period of just 15 years to 1989.  The maps below from the World Wildlife Fund (WWF) and Conservation International show the dramatic reduction in China’s panda habitat.  (Click on the images below to view the full-size maps in a separate browser tab or window.) 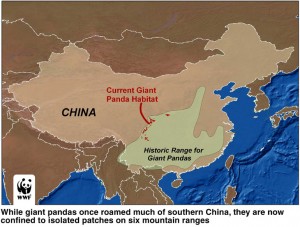 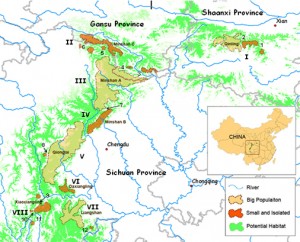 The International Union for Conservation of Nature (IUCN) Red List of Threatened Species classifies the giant panda as an endangered species based on several factors, including population size, extent of interaction, capacity for reproduction and rate of population change.  Billed as “the most comprehensive survey of China’s giant panda population,” a four-year study by the State Forestry Administration of China and the WWF identified nearly 1,600 giant pandas living in the wild in China by 2004.  The encouraging results revealed a panda population more than 40 percent larger than previously thought.

Fortunately, the Chinese government has taken action to reclaim and protect the pandas and their stomping grounds by establishing a multitude of panda reserves.  By mid-2005, over 50 reserves protected more than 45 percent of the remaining giant panda habitat.

Since its founding in 1987 with the rescue of six giant pandas, Chengdu Panda Base (officially the Chengdu Research Base of Giant Panda Breeding) has managed to breed and nurture a population of 108 giant pandas, a number that it hopes to increase to 150 pandas within the next ten years.  Along with wildlife research and captive breeding, the center also engages in conservation education and educational tourism.  In addition to giant pandas, Chengdu Panda Base is home to red pandas, golden monkeys and other wild and indigenous species.

Northeast of Chengdu in Shaanxi province, the mystical environs of the fog-crested Qinling mountain range lay claim to about twenty percent of China’s wild pandas.  The mountains form a boundary between two of China’s largest watersheds, the Chiangjiang (Yangtze River) and Huang He (Yellow River).  Set in the foothills of the Qinling mountains, the Shaanxi Wild Animal Conservation Research Centre (SWARC) works to rescue injured animals and prevent the extinction of China’s indigenous species, including: giant pandas, crested ibis, golden monkeys, takins and brown-eared pheasants.

Farther east, the China Conservation and Research Center for Giant Panda was founded in Wolong, China with the help of the WWF.  The Wolong panda center has succeeded in breeding giant pandas that have been provided to zoos around the world, including: Austria’s Tiergarten Schonbrunn (Zoo Vienna), Japan’s Kobe Oji Zoo, Thailand’s Chiang Mai Zoo, and the U.S.’ San Diego Zoo and Smithsonian National Zoo in Washington D.C.  The picture below shows a group of Wolong staff holding a host of giant panda cubs. 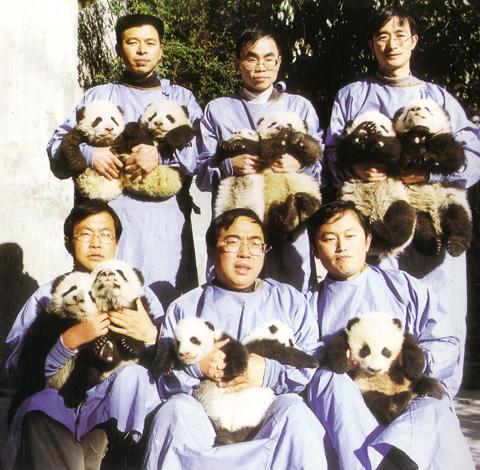 In honor of the panda’s highly photogenic status and emotional appeal as a symbol of environmental conservation, the World Wildlife Fund adopted the giant panda for its logo when the organization was formed in 1961.  As the first international conversation organization to work in China, WWF has been active in protecting China’s giant pandas since 1980.

Fortunately, the WWF’s friendly history with the Chinese government has not kept it from pushing China to do more to protect the natural environment at home and broad, particularly in Africa.  According to the WWF, “China is now the world’s largest consumer of forest products, and it imports more than 50 percent of Mozambique’s and Tanzania’s timber.”  As part of its China-Africa work, the WWF is partnering with the U.K.’s Department for International Development (DFID) to facilitate cooperation between Chinese and African officials that would promote the sustainable, legal use of Africa’s rich supply of natural resources.

Visit a Panda, Get Involved

For the more adventurous, one of the best ways to enjoy an up-close and personal encounter with a giant panda is to visit a research center in China.  Chengdu Panda Base offers visitors the chance to walk or ride through the base’s panda habitat, tour the panda museum and take part in educational programming.  Truly diehard panda aficionados can apply to participate in the base’s one-to-three month internship program.

For those short of the time or cash to visit the pandas in their native land, a limited number of them can be found in a handful of zoos around the world.  At present, a total of 45 giant pandas live in 16 zoos in eleven countries, including: Australia, Austria, France, Germany, Japan, Mexico, Spain, Taiwan, Thailand, U.K. and U.S.

Japan claims the distinction of having the most zoos with giant pandas.  A total of eight giant pandas reside at Adventure World Shirahama, the Kobe Oji Zoo and Tokyo’s Ueno Zoo.  While most giant pandas living abroad come from breeding centers in China, three of Adventure World’s four giant pandas were born locally.  At Ueno, Ri Ri and Shin Shin are the proud parents of the first baby giant panda born in 2012 and the first born in Tokyo since 1988.

In the U.S., four zoos are lucky to have custody of giant pandas: the Smithsonian National Zoo in Washington, D.C., the San Diego Zoo, Zoo Atlanta and Zoo Memphis.  The Smithsonian hosts giant pandas Mei Xiang and Tian Tian through 2015 under a Giant Panda Cooperative Research and Breeding Agreement with the China Wildlife Conservation Association.  Thanks to a cooperative arrangement with Chengdu Panda Base, Zoo Atlanta has an enviable collection of four giant pandas, Lun Lun, Yang Yang, Mei Lan and Xi Lan, whose birthdays all happen to fall within two weeks of one another in September.

To learn more about contributing to international efforts to protect the giant pandas and their natural habitats, visit the sites of conservation organizations like the World Wildlife Fund, The Nature Conservancy and Conservation International.