Inequality Around the World

Inequality may be one of the great challenges to global development and communities’ social fabric.  While much room for progress remains, globalization and the rise of the BRIC countries and other emerging economies have helped reduce global inequality between nations by lifting hundreds of millions of people out of poverty, raising living standards and expanding opportunities.  Innovative programs like Brazil’s Bolsa Familia and Mexico’s Opportunidades have helped give the poor a fighting chance at a brighter future.

The story of inequality in many developed countries, including the U.S. and U.K., is more sobering.  A growing gap between the haves and have-nots is reflected in lower living standards for many, higher levels of poverty and heightened social tensions.  The Occupy Movement in the U.S. is just one well-publicized example of the frustration over the fraction of people who benefit disproportionately from the current economic system.

The charts below from The Economist show the contrasting trends in global and country inequality. 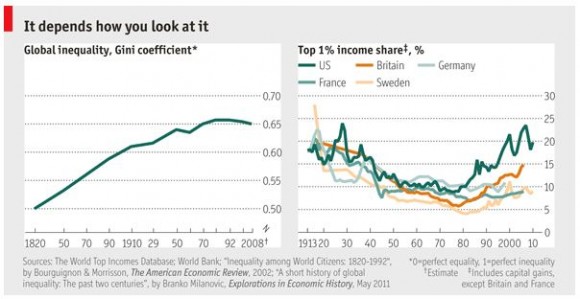 The case for fighting inequality is far from just a lofty goal of the well-intentioned.  Inequality carries high economic, social and moral costs.  The unequal distribution of income and access to key services like education and health can undermine economic growth and social cohesion, inflate health care costs and drive up crime.

Severe income disparity and the related issue of structurally high un/under-employment ranked as the fourth and second, respectively, most concerning global risks in the World Economic Forum’s Global Risks 2014 report.  Even some on Wall Street have come around to the realization that inequality isn’t good for the economy.

The U.S. is the most unequal advanced economy based on a comparison of countries’ income gini coefficients.  The chart below from The Washington Post shows the variation in income inequality across developed countries. 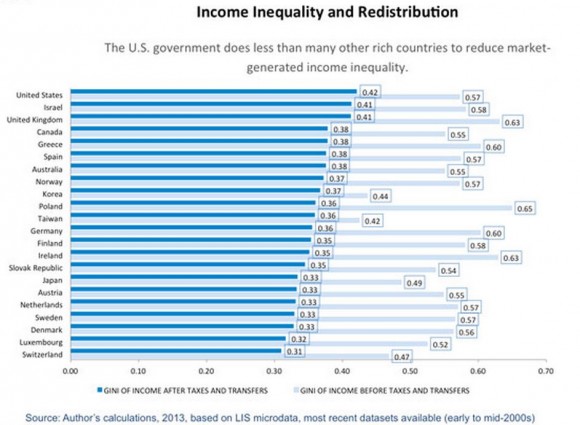 In places like the U.S. and U.K., the well-to-do have grown richer as people of more modest means have found it increasingly difficult to maintain their living standards or even stay above the poverty line.

Economic gains since as far back as the late 1960s have gone to just the top 20 percent of income earners in the U.S.  The lion’s share of those have fallen to the top 5 percent, 1 percent and more elite groups of U.S. households, as shown in the graph below from a Harvard Business Review blog post by Justin Fox.  From 1993 to 2013, Fox notes, “incomes of the top 1% [of U.S. households] grew 86.1 percent.”  Meanwhile, as the well-to-do’s share of the national economic pie surged, the share going to the remaining 80 percent of U.S. households either declined or stayed roughly the same. 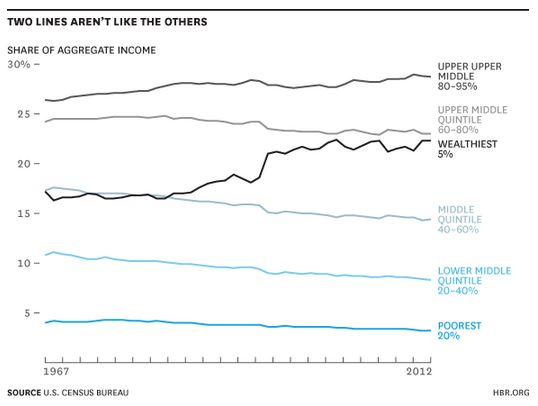 Extreme inequality has long been a common characteristic of many resource-rich, undemocratic developing countries.  In Latin America, Africa and elsewhere, a few well-connected elites or strongmen have often seized on the opportunity to exploit natural resources like oil, timber and precious minerals for personal gain at the expense of more inclusive economic development.

Developing countries that manage to escape this “resource curse” can quickly face other inequality challenges.  While the rising economic tide has benefitted a relatively large share of people in China and other places, some have cashed in far more than others.

In part, this is a natural, even healthy component of the economic growth story that rewards those who innovate and take risks, as long as everyone’s situation improves in the process.  Inequality becomes an issue when the gap grows too wide, gains are a product of exploitation and opportunities are restricted to a privileged few.

Migrant workers are one group that is often on the front lines of inequality in developing countries. They respond to the promise of economic opportunity in cities and factories in search of jobs and with hope of carving out a better life and future for their families.  In some cases, their great sacrifices are rewarded.

In many others, a lack of legal standing, low levels of education and few alternatives often leave them vulnerable to exploitation and unable to defend their rights.  In the worst case scenario, they can fall prey to the scourge of human trafficking and modern day slavery.

The poor and people in developing countries bear the greatest burden of environmental degradation and climate change.  Highly dependent on age-old livelihoods like agriculture and fishing, they are especially vulnerable to the depletion of natural resources.  Many NGOs and international organizations, including Oxfam and the United Nations Human Development Program (UNDP), have warned that the lack of attention to sustainable development threatens to reverse hard-fought gains in alleviating poverty.

The unequal roles and treatment of women and men are another face of inequality.  In the U.S., women continue to take home a fraction of the pay that men do for the same job.  The effects of unequal pay are most acute for single mothers and other households where women are the main breadwinner.

In developing countries, women typically confront even greater obstacles, ranging from discriminatory traditional customs and stereotypes to exclusion from decision-making over community affairs and management of natural resources.

The causes and effects of inequality are complex and intertwined and care must be taken to distinguish causality from correlation.  Some are rooted in the fundamentals of good governance and inclusive development.  Others are products of old-fashioned power politics and the evolution of the global economic system.

So what can be done to right this unsettling imbalance and restore a sense of opportunity for the billions of people who are being excluded from the gains of economic development?  There is certainly no easy fix but taking some of the following actions could be a good start.