Charts, tables and data offer a visual perspective on interesting topics in international development, globalization, sustainability and world rankings. Most link to articles that appear elsewhere on the site.

The BRIC countries‘ collective share of total world economic output rose from 16 to 22 percent from 2000 to 2008. Together, they accounted for 30 percent of the increase in global output. China alone comprised more than half of the BRIC contribution with greater than 15 percent of the growth in world economic output. The chart below compares key economic and development indicators for the BRIC countries, including GDP level and growth, merchandise exports and improvements in each country’s Human Development Index (HDI). 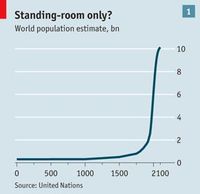 Change in Life Expectancies by Country

The life expectancies of men and women have increased considerably in the last 50 or so years.  (Click on the image below to see the full-size table in a separate browser tab or window.)

The chart below shows that the total fertility rates for a number of major European and Asian economies are well below the so-called replacement level of 2.1 children per woman at which population levels remain stable.  (Click on the image below for a larger version.)

Due to the above trends in life expectancy and fertility rates, people aged 65 and over account for a much larger share of many national populations and a larger share of the roughly working age population ages 15-64.  (Click on the image below for a larger version.)

Income is one of the three main components of the UNDP’s Human Development Index (HDI), along with health and education.  The HDI and other quality of life indicators measure income in GDP per capita in US$ at purchasing power parity (PPP).  The table below shows the substantial increases in income that have benefited living standards around the world in recent years. (Click on the image for a larger version.)

In many European cities, a majority of residents choose the eco-friendly options of walking, bicycling or taking public transportation to work according to the Green City Index.  In Stockholm and Amsterdam, an impressive 93 percent and 83 percent, respectively, of residents rely on one of these environmentally sustainable modes of transportation for commuting to work.  Amsterdam’s ranking should come as little surprise to those familiar with its unofficial status as a world capital of bike riding.  The table below shows the share of residents who choose eco-friendly commuting options for the top ranking cities in the European Green City Index and the U.S. and Canada Green City Index.

The U.S. is the world’s second largest emitter of greenhouse gases behind China, and U.S. per capita emissions far exceed those of China.  The popularity of cars and correspondingly limited scale of public transportation in the U.S. are noteworthy culprits.  New York is the only city in the U.S. and Canada Green City Index where the share of residents who walk, bike or take public transportation to work comes close to those of cities in the European Green City Index.

The Environmental Performance Index (EPI) scores and ranks 163 countries on 25 performance Indicators.  The “Access to Water Quality” indicator stands out for both its relative simplicity and significance to the everyday quality of life of people around the world.  The indicator assesses the percentage of a country’s population with access to an improved source of drinking water.  Disease contracted from contaminated water is a leading cause of death among children.  In 69 countries, more than 20 percent of the population does not have access to improved water.  In 37 countries, 50 percent or more of the nation’s people go without improved water.  Across 122 of the 163 countries in the index, nearly 1.5 billion people are at risk of health issues caused by drinking water from an unimproved, potentially contaminated source.  (Click the image below to see a larger version of the table.)

Sustainability in the News

The term Sustainability has seen a large, steady increase in usage in major world newspapers since 1990. The chart below from the Trends in Sustainability site shows how usage of the word sustainability has increased from roughly 0.05 to 0.45 articles per newspaper issue.  (Click on the image below to view the full-size chart in a separate browser tab.) 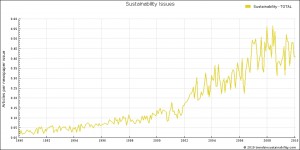 A new study called Seafood Print funded by the Pew Charitable Trusts and National Geographic challenges the sustainability of the world’s seafood consumption.  Using data from the study, Global Sherpa calculated the annual per capita consumption for the biggest seafood eaters.  Chileans and Japanese consume more than 150 pounds of fish per person annually.  Taiwan, South Korea, and Malaysia aren’t too far behind at 144, 124, and 118 pounds, respectively.

People in China and India currently consume only 22.5 and 6.0 pounds of seafood, respectively, per year.  If per capita consumption in China were to grow to anywhere close to that of Taiwan at 144 pounds per person, it’s hard to see how the ocean would keep up at this point. (Click on the image below for a larger version.)

The Earth Policy Institute tracks world bicycle production as one indicator of the state of the “eco-economy.”  From 1970 to 2007, bicycle output nearly quadrupled, while car production roughly doubled.  Interestingly, electric bicycles, or “e-bikes,” have accounted for a large portion of recent growth with production doubling from 2004 to 21 million units in 2007.  Several factors may be influencing the recent divergence in production, including: 1) 1972 oil crisis and resulting large increases in gas prices (which also led to a pronounced reduction in car and engine sizes in the U.S.); 2) growing awareness and acceptance of climate change science and concern for the environment; and 3) rapid economic advancement of large parts of the developing world where bicycles become accessible to a much larger portion of the population in developing countries long before cars do. (For more on the progress in global development, see the related post Analyzing Global Progress: Interpreting the 2010 UNDP Human Development Report and Index.)  The chart below shows world bicycle and automobile production over the period 1950-2007.  (Click on the image below to view a larger version.)

See the related post World Bike Market, Eco Indicators and Development for a more detailed analysis.  Check out the companion article Amsterdam: Bike Riding Capital of the World for more on bike-friendly cities and urban plans that are good for the environment.

Obesity is one of the biggest public health concerns in many countries around the world.  It increases the risk of serious health problems, shortens life expectancies, and takes a toll on quality of life and self-esteem.  Adults with a Body Mass Index (BMI) over 30 are generally considered obese.  BMI can be calculated by the formula: weight (kg) / [height (m)]^2.  The corresponding BMI with the same risk level may be higher or lower than 30 for some ethnic groups.  BMI can be somewhat misleading as a health indicator for people like athletes with high muscle mass since it is not a direct measure of  a person’s body fat.  A variety of methods, including calipers that measure skinfold thickness, can be used to determine a person’s actual body fat.  (Click on the image below for a larger version.)

The appearance of newspaper articles mentioning HIV has decreased significantly since the early 1990’s. By 1997-98, the number of articles containing references to HIV reached roughly 0.75 articles, down from 1.5 articles per newspaper during the period 1990-93.  (Click on the image below to view the full-size chart in a separate browser tab.) 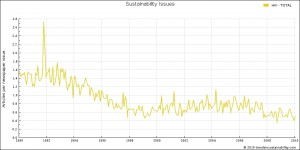 The trend in newspaper coverage of the HIV issue seems to relate more to editorial decisions than a decrease in HIV cases around the world. Data from the World Bank’s Health, Nutrition and Population Statistics database show the prevalence of HIV as a percentage of the total world population ages 15-49 increasing from 0.37 to 0.9 percent during the period 1990-2007.