Mayan ruins and sites marking the Maya’s fascinating ancient civilization and culture dot the Central America countryside in Belize, Mexico and Guatemala.  While Mayan civilization and culture date back well into BC times, many Mayan ruins and sites were only recently discovered and have yet to be excavated.  Exploring these beautiful, ancient cities and artifacts of the past makes for an exciting, memorable adventure and a great way to learn more about the culture and history of Mayan civilization.  (Click on the image below to see a larger version.) 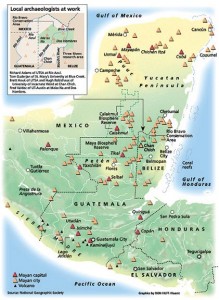 Great Mayan civilizations and more modest settlements ranged from Mexico’s Yucatan Peninsula in the north to Honduras in the south.  In addition to constructing massive temple complexes, Mayan culture is known for having devised an uncannily accurate and complex calendar system, amassed considerable gold and wealth, and concocted a variety of medicinal treatments from their natural surroundings.

Contrary to what the general term “Mayan” might conjure up, Mayan peoples were not ethnically homogenous, but rather loosely related communities that were often defined by differences in ancestry, language dialects and geography.  Mayan cities both cooperated and competed with one another.  They formed alliances with fellow Mayan settlements and kingdoms to facilitate trade as well as fulfill their political and military ambitions.

Mayan faith and religion played a central role in organizing politics and culture in Mayan civilization.  The king, or high lord, and royal family occupied the top rung of a strict political hierarchy, followed by an elite tier of priests, warriors and scribes.  The next tier of Mayan artisans and traders were appreciated for their economic value.  Subsistence farmers and servants made up the bottom rung of Mayan civilization.

The high lord of the Mayan kingdom was thought to hold sway with the gods of the underworld, who would assume the earthly form of a jaguar.

The amazing, complex Mayan calendar served as an incredibly accurate device for measuring time as well as a tool for interpreting the order of the universe.

Still used today in some places, the ancient Mayan system of time measurement is actually three calendars in one.  The first calendar, known as the Tzolkin, refers to a period of 260 days likely based on the nine month birth period.  The second calendar, called the Haab, is a solar year of 365 days.  Together, the Tzolkin and Haab form the third calendar known as the Calendar Round, referring to a period of 52 solar years.

The Mayan solar calendar is astoundingly accurate, even more so than the modern calendar we use today.  The pictures below show the Mayan Sacred Round Calendar (Tzolkin, left) and Solar Round Calendar (Haab, right). 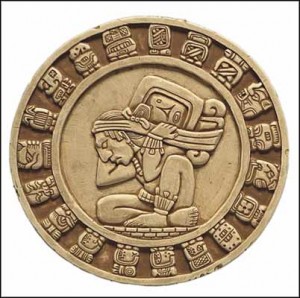 The so-called Mayan 2012 end of the world or “doomsday” prediction might be the most intriguing aspect of the Mayan calendar today.  Based on their ancient calendar system, Mayans believed the “Great Cycle of the present age” would last for 13 backtun cycles of 144,000 days and come to an end on December 23, 2012.  This calculation has led some people to fear that the Mayan “doomsday prediction” actually means civilization as we know it will come to some kind of cataclysmic end next year.  While debating the likelihood of this prophecy can make for interesting conversation, Maya people saw the world as undergoing recurring cycles of death and rebirth, so that the end of the current calendar cycle also marks the start of the next one rather than an onslaught of the apocalypse.

Mayan culture made adept use of the natural environment in Central America to maintain health and treat illnesses.  Traditional Mayan medicine is said to employ native plants to treat malaria and manage diabetes, among many other uses.

Mayan civilization and culture flourished for thousands of years until roughly 1500, about the time that the Spanish set about exploring and conquering the New World.  A combination of Spanish military might and the introduction of foreign pathogens from the Old World that couldn’t be tamed by Mayan medicine is thought to have hastened the somewhat mysterious downfall and large-scale disappearance of ancient Mayan civilization.

Belize is home to many of the oldest ruins of Mayan civilization and more than 900 Mayan sites.  The most popular and significant Mayan ruins in Belize include Altun Ha, which can also be seen on the label of Belize’s national beer, Belikin, Cahal Pech and Caracol near San Ignacio, and Lamanai.  Altun Ha, Caracol, Cerros, Cuello and Lamanai are all among the earliest known Mayan sites and cities.  Belize is also a popular point of departure for trips to the ancient Mayan civilization of Tikal in Guatemala.

Altun Ha refers to the ruins of an ancient Mayan city located about 30 miles (50 km) north of Belize City.  Mayan peoples first occupied Altun Ha around 200 BC, with the majority of construction occurring from 200 to 900 AD.  Visitors to Belize will recognize the largest of Altun Ha’s Mayan temple pyramids, the “Temple of the Masonry Altars,” from the front label of a bottle of a Belikin.  Prior to coming to the attention of the archeological community in 1963, some stones from Altun Ha’s ancient Mayan structures were reportedly repurposed for residential construction in the nearby Belize agricultural village of Rockstone Pond. 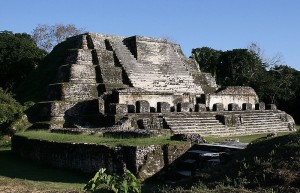 Caracol is the largest Mayan site and ruins in Belize.  Located about 25 miles south of San Ignacio in the foothills of the Maya Mountains, Caracol occupies an area of some 88 square kilometers and once supported a population of about 140,000 people in the sixth century AD.  The ruins of the major Mayan civilization and archaeological site encompass numerous temples, pyramids, royal tombs, dwellings and structures, along with a sizeable collection of Mayan art.  Caracol’s political accomplishments include defeating the neighboring Mayan kingdom of Tikal in Guatemala.  Despite its large scale and historical significance, the Mayan ruins of Caracol remained hidden in Belize’s dense tropical forest until a logger reportedly came across the site while searching for mahogany trees in 1937.

Lamanai was a long-running, significant Mayan civilization located in northern Belize’s Orange Walk District.  Occupied as early as the 16th century BC, the Mayans continued to inhabit Lamanai all the way to the 17th century AD.  Lamanai’s staying power proved so great that a Mayan revolt managed to drive away settlers from the Spanish conquest of Mexico’s Yucatan Peninsula.  Lamanai subsequently became part of British Honduras before the latter was granted independence by the British and officially renamed Belize in 1973. 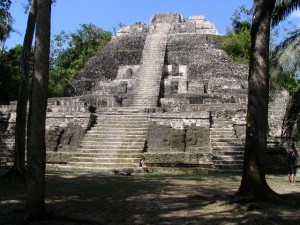 Tikal was a major Mayan civilization and arbiter of Mayan culture located in the dense rainforest of Guatemala.  Mayans inhabited Tikal from around 700 BC to the end of the tenth century AD, with the kingdom reaching its peak of power and influence between 200 and 900 AD.

King Jaguar Paw made Tikal into the dominant Mayan kingdom in the region in the fourth century AD.  In 562, Lord Water of the Mayan kingdom of Caracol in present-day Belize conquered Tikal and sacrificed Tikal’s King Double Bird.  Tikal languished for a time under Caracol’s rule until the late seventh century.  In 711, Tikal’s new ruler, Lord Chocolate, who also went by King Moon Double Comb for his elaborate headdress, managed to defeat neighboring Calakmul and restore Tikal to its position as the predominant kingdom in the Central Maya region.

Tikal National Park covers 222 square miles of Mayan ruins and dense Guatemalan rainforest.  Considering the massive scale of the site, about 10 square miles of this expanse had been excavated as of 2008.  The excavated portions of the ruins include five large pyramids that are among the site’s most significant structures: the Temple of the Jaguar and Temple of the Masks in the Great Plaza, Pyramid III, the Temple of the Two-Headed Serpent, and Pyramid V.  The Mayan temples range in height from 138 to 213 feet (42 to 65 meters). 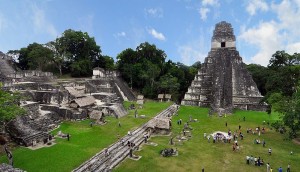 Guatemala designated the ruins of the Mayan civilization of Tikal a National Monument in 1931 and a National Park in 1955.  UNESCO recognized Tikal as a World Heritage Site in 1979.  In between, George Lucas apparently saw fit to use Tikal as a rebel base in the original Star Wars movie in 1977.

Chichen Itza is the largest Mayan ruins on Mexico’s Yucatan Peninsula and one the country’s most-visited travel destinations.  Chichen Itza emerged as a powerful regional capital toward the end of the Late Classic Period (600 – 900 AD) of pre-Columbian Mesoamerica, roughly corresponding to the decline of the traditional Mayan kingdoms of the southern lowlands.  As a sign and source of its considerable economic power, Chichen Itza was able to use maritime trade and transport through its port of Isla Cerritos to obtain gold and other natural resources from as far away as southern Central America.  Most of Chichen Itza’s grand Mayan architecture and many of its most significant structures were built in a combination of Mayan and Toltec styles after coming under the rule of the Itzaes in the tenth century. 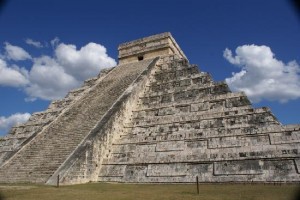 Tulum occupies a picturesque perch overlooking the Caribbean Sea on Mexico’s Yucatan Peninsula.  Compared with other Mayan ruins, Tulum is a fairly recent artifact of Mayan civilization and one of the most well-preserved Mayan sites.  Mayan culture in Tulum reached its peak between the 13th and 15th centuries.  Perhaps owing partly to its strategic position atop 12-meter (39 foot) high cliffs, Tulum managed to survive for 70 years after the Spanish began occupying Mexico. 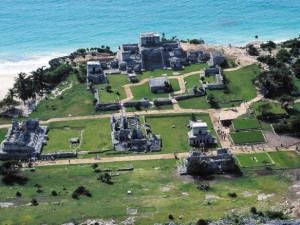 Palenque was a Mayan city state located in the southern Mexican state of Chiapas about 130 km south of Ciudad del Carmen.  The Mayans of Mexico’s southern lowlands inhabited Palenque from about 100 BC to 800 AD.  Though a medium-sized Mayan site, Palenque is said to contain some of the finest examples of the Mayan culture’s architecture, sculpture and carvings.  UNESCO declared the Pre-Hispanic City and National Park of Palenque a World Heritage Site in 1987. 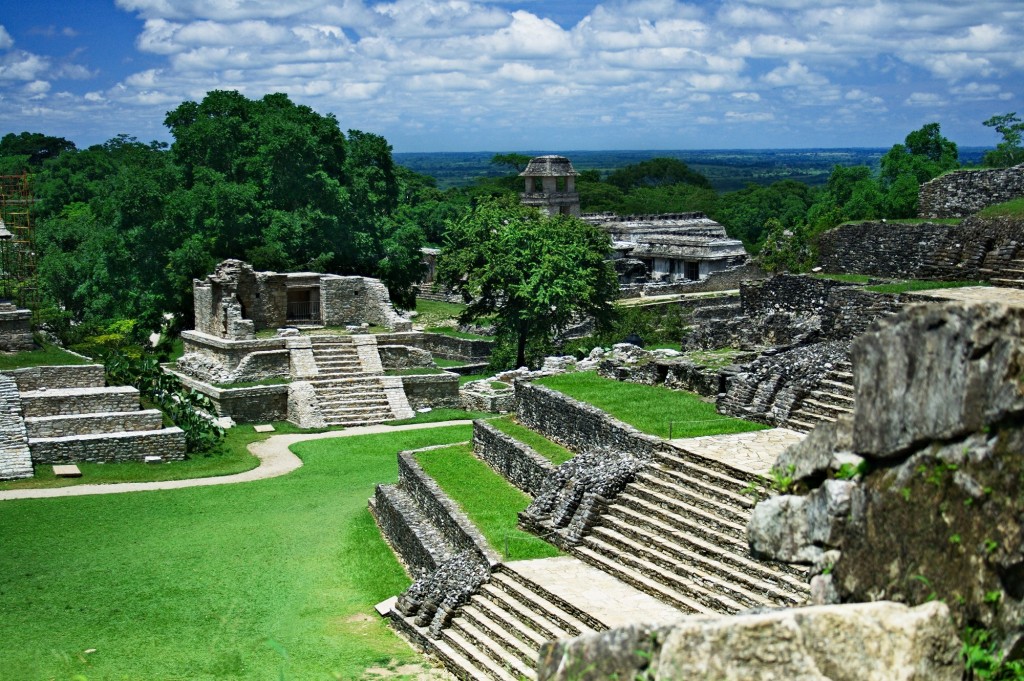