The BRIC countries label refers to a select group of four large, developing countries (Brazil, Russia, India and China). The four BRIC countries are distinguished from a host of other promising emerging markets by their demographic and economic potential to rank among the world’s largest and most influential economies in the 21st century (and by having a reasonable chance of realizing that potential).  Together, the four original BRIC countries comprise more than 2.8 billion people or 40 percent of the world’s population, cover more than a quarter of the world’s land area over three continents, and account for more than 25 percent of global GDP.

A country’s population and demographics, among other factors, directly affect the potential size of its economy and its capacity to function as an engine of global economic growth and development. As early as 2003, Goldman Sachs forecasted that China and India would become the first and third largest economies by 2050, with Brazil and Russia capturing the fifth and sixth spots. The chart below shows a more recent forecast of the world ranking of the biggest economies in the year 2050.  (Click on the image below to view the full-size chart in a separate tab or browser window.) 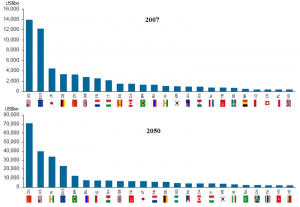 The BRIC designation was first coined by Jim O’Neil of Goldman Sachs in a 2001 paper titled “The World Needs Better Economic BRICs.”  The BRIC countries have since gone on to meet and seek out opportunities for cooperation in trade, investment, infrastructure development and other arenas. China invited South Africa to join the group of BRIC nations in December, 2010 and hosted the third annual BRICs Summit in April, 2011.

Economic Growth and Development of the BRICs

To date, the scale of China’s economy and pace of its development has out-distanced those of its BRIC peers. China alone contributed more than half of the BRIC countries’ share and greater than 15 percent of the growth in world economic output from 2000 to 2008. The chart above on key development indicators for the BRIC countries shows the sharp contrast in GDP, merchandise exports and the UNDP’s Human Development Index (HDI) between China and the other BRIC countries.

The rapid economic growth and demographics of China and India are expected to give rise to a large middle class whose consumption would help drive the BRICs’ economic development and expansion of the global economy.  The charts below depict how the increase in the middle class population of the BRIC countries is forecasted to more than double that of the developed G7 economies.  (Click on the images below to view the full-size charts in separate tabs or browser windows.) 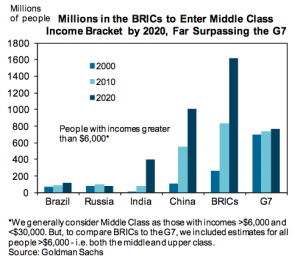 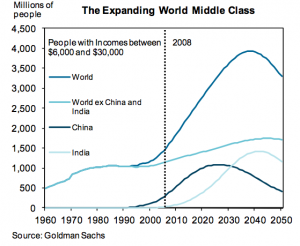 Science and Technology in the BRICs

The BRIC countries of China, India and Brazil account for much of the dramatic increase in science research investments and scientific publications. Since 2002, global spending on science R&D has increased by 45 percent to more than $1,000 billion (one trillion) U.S. dollars. From 2002 to 2007, China, India and Brazil more than doubled their spending on science research, raising their collective share of global R&D spending from 17 to 24 percent.

China’s development planning has targeted a number of scientific fields and related industries, including clean energy, green transportation and rare earths, among others. Since 1999, China’s spending on science R&D has grown 20 percent annually to more than $100 billion. By 2020, China plans to invest 2.5 percent of GDP in science research.

Many analysts and commentators have suggested expanding the original group of four BRIC nations to include other emerging markets. Goldman Sachs has resisted conferring BRIC status on other developing countries on the grounds that their demographics and economic characteristics do not hold the potential for them to rival the economic size or influence of the BRIC countries or today’s leading economies (e.g., U.S. and Japan).

In a nod to the interest in other emerging markets, Goldman Sachs identified another group of economically dynamic and promising developing countries creatively labeled the “Next 11” in its 2005 Economics Paper No. 134 “How Solid are the BRICs?” The Next 11 consists of a broader group of emerging markets with the potential to play significant roles in the global economy, including: Bangladesh, Egypt, Indonesia, Iran, Korea, Mexico, Nigeria, Pakistan, Philippines, Turkey and Vietnam.

Of the Next 11, two countries, Mexico and “perhaps” South Korea, were considered to “have the capacity to become as important globally as the BRICs.” Both OECD countries were excluded from the BRIC grouping on the basis that they were already too much farther along in their economic development than the BRICs and were not likely to attain the economic stature or global influence of the original four BRIC countries.

Indonesia has been one of the stronger performers of the Next 11 group of developing countries. With greater than 230 million people, Indonesia’s population is more than 4 times larger than South Africa’s population and more than 60 percent bigger than Russia’s. At $540.3 billion in 2009, Indonesia’s GDP was nearly double that of South Africa, though it was still less than half the size of Russia’s economy.

Despite China’s invitation, Goldman Sachs’ O’Neil has long contended that South Africa’s population of 50 million people, a fraction of Russia’s 143 million and China’s 1.34 billion people, is too small for BRIC status. At roughly $285 billion in 2009, South Africa’s economy was less than one quarter that of Russia’s, the smallest of the original BRIC country economies at about $1,232 billion.

The Growth Environment Score (GES) was introduced by Goldman Sachs in the same paper that identified the Next 11. The GES is an index developed to measure the extent to which structural conditions and policy settings in a country are conducive to transforming the economic potential of the BRICs, Next 11 and other countries into reality.

The GES consists of 13 sub-indices that fall under one of five categories of economic growth determinants: