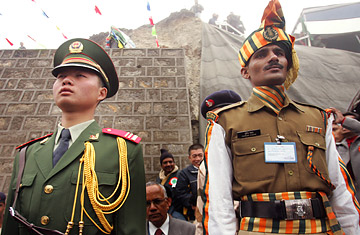 China and India – the world’s two biggest countries, and maybe someday, two largest markets have much in common, and much that sets them apart. China’s 12th Five-Year Plan and India’s penchant for jugaad are prime examples. Why has China’s economic growth and development outstripped India’s?  What accounts for the differences and what doesn’t?  In this article, we consider some current, lesser known drivers and obstacles of economic development in each country.

China and India – Economic Development in the News

News about China highlights the expectations going into this weekend’s China’s National People’s Congress (NPC) session.  Largely a function of the Communist Party of China (CPC or CCP), the NPC is the highest governing body in China and the country’s only legislative house.

The key output of the latest NPC session will be China’s 12th Five-Year Plan.  China’s Five-Year Plans have played an important role in identifying key economic and social objectives and successfully shaping the course of China’s economic development in a number of areas.

In sharp contrast to the official order of China’s Five-Year Plans, recent New York Times coverage of India has focused on the Hindi concept of jugaad and a significant reduction of foreign direct investment in India.

Contrary to the generally positive uptick in foreign direct investment in other BRIC countries and emerging markets in Asia and Latin America in 2010, India saw a sizeable reduction in inflows of foreign investment from 2009 to 2010.  Whereas FDI (direct physical investment as opposed to portfolio or stock market investments) in China increased by 6.3 percent and other countries benefited from much greater gains, FDI in India declined by 31.5 percent from $34.6 billion to $23.7 billion.  The chart below is a reproduction of one from the New York Times that uses data from the United Nations Conference on Trade and Development.

Jugaad, a Hindi word referring to a seemingly beneficial trait of resourcefulness when the odds are against you, is part of the problem behind India’s FDI and more enduring development issues according to several Indian commentators.  In a letter to the New York Times, Indian author and editor Manu Joseph describes jugaad as a product of, “an important Indian character – the uncompromising practicality of the individual, an untamed form of great personal freedom and informality.”  According to Joseph, the pitfalls of jugaad for development and civil society in India include the pronounced lack of a value structure that would provide valuable, long-term guidance and corrosive, rampant political corruption.

Rather than just jugaad itself though, the issue seems to involve a kind of chicken and egg problem related to the conditions and circumstances that give rise to jugaad in the first place.  From social science, we know that human beings have a clear tendency to act in accordance with the incentives and parameters of their environment.  In other words, did jugaad lay the groundwork for corruption or does jugaad result from the necessity of finding a way to survive and prosper in a corrupt world?  It’s likely that the answer lies somewhere in the middle or involves healthy portions of both interpretations.

In either case, the spur-of-the-moment, turn-on-a-dime, improvisational nature of jugaad stands in stark contrast to the highly regimented, methodical, long-term planning of the Five-Year Plans generated by China’s National People’s Congress.

Despite the yin and yang quality of China’s Five-Year Plans and jugaad, China and India still look very similar in many respects when compared to the rest of the world.  The population of each country is well over one billion people.  The world’s next largest country, the U.S., has barely one quarter of India’s roughly 1.2 billion people.

In terms of geography, culture and politics, the relative global proximity of China and India in Asia has contributed to a history of religious, cultural and economic exchange and influence between the two countries.  While China’s total area is about triple India’s, both countries’ large territories make for an abundance of large, distant provinces and states as well as economic centers (like Shanghai, Hong Kong, Mumbai, Guangzhou and Bangalore) that are physically and mentally far removed from the two countries’ political capitals and leadership in Beijing and New Delhi.

Economic Growth and Development in China and India

Both China and India have also made great strides in economic growth and development in recent years.  In each country, rapid economic development has led to widespread improvement in living standards and quality of life and lifted hundreds of millions of people out of poverty.

In addition to large increases in per capita income, China and India have also achieved considerable gains in health and longevity.  From 1960 to 2008, life expectancy at birth in China and India increased by 56.8 percent from 46.6 to 73.1 years and by 50.2 percent from 42.4 to 63.7 years, respectively.

Some of the key commonalities and differences between China and India are summarized in the table below.

Despite their country’s impressive performance, many Indians still look to China’s economic development and wonder why India has lagged behind.  To be sure, the answer is far more complicated than the distinction between long-term planning and short-term adaptation.

Successful economic and social development depends on the complex interplay of a multitude of factors.  Education and training, capital and labor markets, entrepreneurship, government policies and regulations, and other important variables can all have a major impact on the pace of economic growth as well as the magnitude and distribution of increases in living standards.

China has certainly not gotten everything right, nor has India done at all badly for itself either.  The same highly centralized system in China that facilitates long-term planning and mobilization can be conducive to excessive regulation and control.  India has done well to achieve so much in the face of corruption and other systemic obstacles that are part and parcel of the jugaad response.

Still, the concepts of planning and jugaad seem to shed some light on possible lessons for future development initiatives.  India’s experience suggests countries that are able to adopt value systems and institutions that limit corruption and inefficient bureaucratic red-tape stand a better chance with economic development.  China’s overall economic development and more targeted wins in clean energy, rare earths and transportation to name a few speak to the merits of long-term planning that can identify and address important development issues by facilitating the effective allocation of resources, overcoming market failures and supplying essential public goods.

Let Us Hear Your Thoughts!

We’d love to hear what you think about comparing the development experiences of China and India.  What do you see as the key factors behind China’s and India’s economic development and relative performance?  Please share any thoughts you may have in the comments section below.