Body Art – A World of Tattoos and Meaning

Photographer Chris Rainier travels the globe to capture the emotion, aesthetics, and cultural significance behind the ancient body art of tattooing and help save the dying traditions of indigenous peoples and cultures on the edge.  A Smithsonian Magazine article looks at the quest of Rainier, the last assistant of Ansel Adams, to portray the human art that identifies and defines a range of cultures and peoples from Borneo to Tahiti to Latino street gangs in Los Angeles.  Along the way, we learn about Rainier’s interesting techniques to capture the real personalities and emotions of his subjects and get to watch some footage of his shoot on location with the Mentawai tribe in Indonesia. 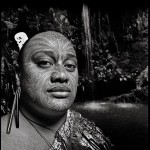 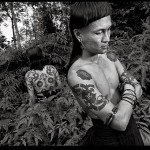 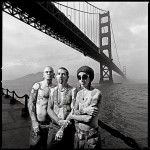 GS has had a few of its own interesting encounters with tattoos.  During a stint on a study abroad program in Kyoto with Stanford University, an enterprising coordinator decided to put a group of us up for a week in a ryokan in the Gojo Rakuen neighborhood.  It didn’t take long to notice that the area clearly had more than its share of identical black Mercedes sedans and stocky, short-haired guys in dark, double-breasted suits.  It turns out we were right in the middle of the home turf of some of Kyoto’s finest yakuza, as the Japanese mafia are known.  In addition to giving us a great incentive to troll the neighborhood for guys with missing pinky fingers, this made for an interesting trip to the local sento, or public bath, where the regular clientele were covered from head to toe in colorful, full-body tattoos. 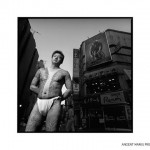 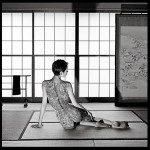 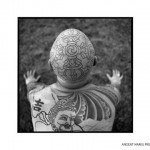 For more on the work of Chris Rainier, see:

Ancient Marks: The Sacred Origins of Tattoos and Body Marking by Chris Rainier.