Belize, the beautiful Central American country on the Caribbean Sea, offers a wealth of travel adventures from snorkeling in the warm, turquoise waters of the Caribbean to exploring ancient Mayan ruins to hiking in lush, tropical rainforests and jungles. 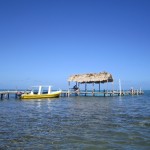 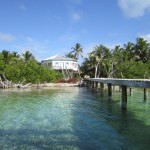 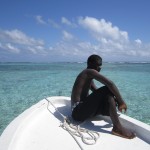 Maps of Belize and Central America

(Click on the images below to view the full-size maps in a separate window or browser tab.) 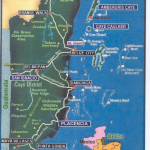 The weather in Belize is all that you could want out of your typical tropical island paradise.  Unless you’re pretty lucky, chances are the weather is nicer in Belize than wherever you may be reading this page, or probably will be in a few more hours.  Daily high temperatures in Belize range from the low to high 80’s (F) all year round.

While you can’t reasonably ask for much better weather, life in paradise doesn’t come completely without compromise.  Two seasons to keep in mind when planning a trip to Belize are the rainy season and lobster season.  Travelers with a fondness for tropical destinations are familiar with prolonged periods of days with frequent, usually short-lived rainfall, which runs from about June to November in Belize.

If you’re one of those who’s inclined to already be contemplating their first meal in Belize, you’ll probably want to know that the country’s tasty, rather affordable lobsters are effectively off-limits for a portion of the year from February 15 to June 15, when the lobsters are busy making more lobsters.

The Belize Barrier Reef Reserve System is a vast marine playground that lets you make the most of all that beautiful Caribbean Sea and balmy tropical weather.  The Belize reef is the largest barrier reef in the Western Hemisphere and the second largest in the world, behind only Australia’s Great Barrier Reef.  The Belize Barrier Reef runs a full 186 miles from Cancun, Mexico on the Yucatan Peninsula to Honduras.  The barrier reef carries the Belize moniker since 72 percent of the living organism is located within the territory of the northernmost Central American country.

In recognition of the barrier reef’s great biodiversity and environmental importance, UNESCO made the Belize Barrier Reef Reserve System a World Heritage Site in 1996.

Belize is a place that recognizes the importance of living in harmony with the natural environment.  Roughly 40 percent of the territory of Belize falls under some form of official environmental protection.  Despite having a land area just over 5 percent that of the state of California, Belize supports one of the world’s most biologically diverse ecosystems.  With a population of only about 333,000 people, Belize has the lowest population density in Central America and the third lowest in the Americas after Guyana and Suriname.  In addition to making for great travel and scientific opportunities, the relative lack of people and abundance of nature in Belize help to preserve the natural environment and make environmental sustainability a top priority for the country.

Ambergis Caye and Caye Caulker northeast of Belize City are the most well-known and popular of the Belize cayes.  The larger Ambergis Caye is home to San Pedro and also just happens to be the inspiration for the singer Madonna’s song La Isla Bonita.  Caye Caulker takes a step back in time to a more laid back, tropical atmosphere less impacted by notoriety and commercialization.

Belize’s long, Caribbean coastline offers an abundance of world-class snorkeling and diving opportunities in the clear, warm waters surrounding the stunning coral formations of the Belize Barrier Reef.  Thanks to the reef’s fascinating biological diversity, snorkelers and divers can expect to get up close and personal with a wide variety of amazing marine life, including: multiple varieties of sharks, rays, sea turtles and whales as well as oodles of species of tropical fish decked out in all colors of the rainbow.  Some of Belize’s most well-known hotspots for snorkeling and diving adventures include: the Blue Hole, Glover’s Reef, Hol Chan, Lighthouse Atoll, Shark Ray Alley(s) (official and un-official), and endless other great local spots (just ask your friendly, licensed guide).

Belize is also home to more than 900 Mayan sites and ruins.  The country’s most popular and significant Mayan sites include Altun Ha, which can be seen on the label of Belize’s national beer, Belikin, Cahal Pech near San Ignacio, and Lamanai.  Altun Ha, Caracol, Cerros, Cuello and Lamanai are all among the earliest known Mayan cities.  Belize is also a popular point of departure for trips to Tikal in Guatemala.

A few miles north of Cockscomb, the Mayflower Bocawina National Park lets visitors experience the wonders of the tropical forest’s diverse, exotic vegetation while hiking trails that run alongside and lead to the tops of cascading waterfalls.

Belize relies on its stunning natural beauty to attract visitors and sustain the livelihoods of its people both through tourism and the support of important local industries, such as citrus farming.  A host of public and private organizations devote considerable time and energy to environmental conservation programs aimed at protecting Belize’s great biodiversity and rich natural ecosystems.

Belize’s natural wonders are readily accessible to visitors from North and South America.  While flight times are a bit longer from other parts of the world, the country’s international airport just north of Belize City also welcomes many visitors from Europe, Asia and other regions around the globe.

Once inside Belize, top attractions from Belize’s tropical island cayes to interior Mayan sites can be reached easily within a few hours travel time by boat, plane or rental car.